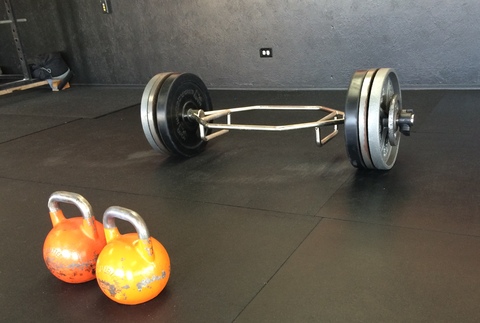 5, LADDERS OF TRAPBAR DEADLIFTS @ 335# AND DOUBLE 28KG KETTLEBELL PRESSES DONE IN SUPERSETS. 50 TOTAL REPS OF EACH.

Nutrition today is obviously not standard. This afternoon I had my weekly junkfood…

Meals are a bit redundant so I wont bother you with the same things.

usual breakfast and lunch and dinner was smallish with just a chicken breast.  Just wasn't that hungry.  Small glass of wine also.

drank all my water and took all my pills

20oz herbal tea with juice from half a lemon

LOTS OF HEAVY BAG DRILLS. SHINS, ELBOWS AND A BUNCH OF STRAIGHT STICK DRILLS ON THE BAG.

Dinner was my cheat meal.  Kristie and I had date night so we ate sushi. I had probably about 2 1/2 rolls and a glass of red wine. we also shared some poke. It was freaking yummy, well worth the cheat.

warmed up with some rowing sprints.

21-15-9 reps for time of:
Handstand Push-ups which I modified to 115 overhead press
Ring Dips which I…

Starting a new program of  medium-light trapbar deadlifts and double kettlebell presses in volume. Today was relatively easy, but the volume is going to more than double over the next few weeks.

same ol breakfast and same ol lunch. Dinner was a bit light as there was some drama at the house.  I had to put my dog of 13 years down last night.  That is why I only got 5 1/2 hours sleep. For dinner I had 2 chicken and apple sausages and thats it.

This is going to be easy.

Had some coconut oil and some beef liver aminos early in the day, but other than that I fasted from 9pm the night before until about 8pm, when we went out to dinner with a big group after the Taekwon-Do tournament. We went to a big Asian buffet in Boise, which sounds like an absolute…

first meal was at noon

4 eggs and 6 pieces of bacon, fish oil and vit d

you know my exercise so we are good there. still need to drink some more water before bed

lower to mid back is tight and outside of hips are a little stiff/sore. nothing to worry about just letting you know. normal kind of good…

Sorry about the tardiness with the update.  Yesterday was much like the rest of my week.

Breakfast was half avocado and a chicken breast. Took my fish oil and vit d.

Lunch was half avocado, 5 oz beef patty, and 20 raspberries and I took my fish oil.

Dinner was a salad with canned tuna in water.

sleep was about 7 hours

mood was good as was energy level.

EASY GOBLET SQUATS AND SINGLE LEG RDLs TO TRY AND FIGURE OUT THIS KNEE ISSUE.

(I essentially took a rest week to hopefully make it better. Have a tournament this weekend and wanted it to be 100% for demonstration purposes. Not so. It may be time to do something more drastic with it. Hoped a rest week would fix the problem.)

Dinner: consisted of me going out with friends and having drinks, by the time I got home I ate a little beef jerky and went to bed. It sucks but it is what it is. I guess that will be my cheat meal for the week.

drank my gallon of water

TRIPLES, DOUBLES AND SINGLES TO 455# (just over double bodyweight).

I use this a gauge to see where my overall strength levels are. If a double bodyweight deadlift feels overly heavy to me, then I know I need to change something.